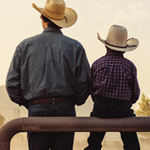 IN THE MIDDLE of my third grade, my dad, Kenneth E. Hagin, started traveling in ministry. He was seldom home to see me compete in sports. But in between meetings, he often would drive all night just so he could eat breakfast with all of us. If I had a school holiday and he was close enough, he would pick me up and bring me with him.

I missed my dad a lot. Many times I'd go behind the back porch and put my face in the fur of my collie so nobody could see my tears as Dad drove off.

As far as I'm concerned, God gave me the greatest role model. I know my dad loved me. He was a mentor, teacher, and godly example to me. My dad was my hero.

When Father's Day comes around, it's hard to talk about fathers without talking about the Heavenly Father. He is an example to "earthly" fathers. We can be reflections of God's character to our children.

Jesus used the story of the prodigal son to bring truth in three perspectives: the undeserving younger son, the bitter older brother, and the good father (Luke 15:11–32). Let's learn about the father.

THE FATHER PROVIDED AN INHERITANCE. Nothing pleases a father better than to be able to give to his children. I don't think anything can cause a father's heart to overflow more than when he can provide for his family!

THE FATHER WAS FAIR. He divided his livelihood equally. Even though the son's request seemed a bit unreasonable, the father did not say anything. A child's behavior is no reason to stop being good to them. Show goodness toward them and guide them back to correctness.

THE FATHER BELIEVED IN HIS SON. When the son was still a long way off, his father saw him. This shows that he was looking for his son to come home. When we stray, our Heavenly Father is watching and looking for us to return.

THE FATHER SHOWED HIS LOVE UNCONDITIONALLY. He saw the son and had compassion on him! He didn't run and say, "You've done wrong." He didn't accuse him. Instead, he immediately welcomed him back. The son said he didn't deserve it, but the father didn't pay any attention to his words.

THE FATHER CELEBRATED THE RETURN OF HIS SON. Affirmation and celebration are needed every step of the way, not just when a child has accomplished some life goals.

THE FATHER RESTORED AND DEFENDED HIS SON. He received him back with open arms—as if he had never been away! He even defended the son against his older brother. Fathers stand by their children even when they are not perfect.

Seeing God in You

Our Heavenly Father does all these things in us. One of the best ways you can be a good father is to let your children see you interact with your Heavenly Father. As your life unfolds, your family will see more than God's plan—they will see His character. The same things God does for His sons and daughters, you can do for yours.