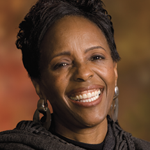 WHAT A GLORIOUS NIGHT of worship. When Deborah Banks, an '87 RBTC graduate, picked up the microphone and began to sing, it was as though the windows of Heaven opened. The crowd stood to their feet and lifted their voices in unison to praise Almighty God.

Deborah told the people to write their prayer requests on a piece of paper and hand the paper to the person next to them. During the evening, they would see God perform miracles as they praised Him. That night, He answered prayers.

One father asked God to help his son. He was considering leaving the military because it was so hard for him. While they were worshipping, he called. "I'm not going to quit," he said. "I'm going to stay on." Through the simple act of worship, many people were healed and others were set free.

Flowing with the Spirit of God is something Deborah learned from Kenneth E. Hagin, a man who flowed in the gifts of the Holy Spirit as naturally as a fish swims in water and a bird flies in the air.

Learning the Move of the Spirit

As the organist for Rhema Singers and Band, Deborah traveled with Rev. Hagin to All Faiths' Crusades and Holy Ghost Meetings. From 1992 to 1998, she had a front-row seat to a mighty move of the Spirit. Behind the scenes, she watched Rev. Hagin pray and consecrate himself and the service to God. He stood on First Corinthians 2:5, "That your faith should not stand in the wisdom of men, but in the power of God." That power always manifested in his meetings.

Members of RS&B also prayed and committed themselves to doing God's will during the services. The Lord honored the faith of Rev. Hagin and the ministry team. God confirmed His Word with miracles. As a result, people walked out of wheelchairs, short legs grew out to match its counterpart, and the sick were healed.

Flowing With the Holy Ghost

Deborah carried those same traits into what she is doing today. She has cultivated humility and consecration in her music ministry. She endeavors to carry out the Lord's plans by being sensitive to the Holy Spirit.

One time Deborah and her music team had planned to open with a particular worship song. The Lord directed her to begin with something different. It created an atmosphere for the Spirit of God to minister to the congregation. As a result, someone gave their heart to the Lord.

Deborah's heart is to train musicians how to flow with the Spirit of God during the worship service. She teaches vocalists and instrumentalists how to lead a congregation into worship. She wants to impart her technical skills as well as the ability to know how the Holy Spirit is moving so He can be followed during any service.

It starts with showing the worship team how to cultivate a deep, personal life of worship, which is essential if they want to lead others into the rivers of corporate Spirit-led worship.

"I believe authentic, Word-based praise and worship is a key ingredient to opening the rivers of the supernatural," shares Deborah. "When we worship God through our voices or our instruments, we create an environment for Him to move and demonstrate Himself. As we learn to flow with the Spirit of God in worship, our lives will be completely transformed, and God will be magnificently glorified."

Creating a Hunger for God

Deborah wants believers to seek a closer relationship with God beyond the four walls of the church. She desires that the Body of Christ would make worship a part of their lifestyle. Whenever she ministers, her services are designed for that purpose.

"I want people to go away hungry for God. So when they go home, they keep the worship going. If they do that, it will change their lives. A lot of people don't realize what praise and worship will do. God inhabits the praise of the people. When they praise Him, He is not going to stay away from sounds that are made in His honor. When we honor Him through praise, worship, and singing, He's going to show up, and things are going to happen."

Deborah was at a point where she felt there was more to life than what she was experiencing. Hungering for more of the Lord she prayed, "God, I need You to do some things for me, or all I'm going to do is go to school, go to work, and come home. I'm going to stop playing the organ. I'm not going to do anything. I'm just going to come home and sit in this apartment."

Shortly after that prayer, Ida, Deborah's upstairs neighbor, received The Word of Faith magazine. Ida subscribed to many magazines, and they seemed to arrive at the same time. The postman usually put them on the floor since they didn't all fit in the mailbox.

One day, Deborah noticed an issue of The Word of Faith magazine on the cement. When she saw it, she thought, "Let me check this out!"

The first article was about Healing School. Something inside of Deborah leaped when she read it. She then came across an ad for RBTC and read, "Do you know that God has something special for you to do but don't know how to do it? Do music, praise, and worship well up within you?"

Deborah told a friend about the ad. He immediately said, "Go, girl, go! You'll never be the same." In six months, she had moved to Broken Arrow and was enrolled in Rhema. "They were the best two years of my life," she says.

TO LEARN MORE about Deborah, go to DeborahKBanksMinistries.com.

To hold THREE praise and worship workshops A MONTH

To be able to LIVE STREAM the WORKSHOPS