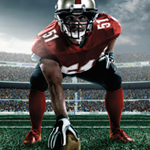 HAVE YOU EVER heard the anonymous saying, "If you don't stand for something, you'll fall for anything?" William Lipscomb Jr. is credited with saying, "If your position is everywhere, your momentum is zero." In other words, if you're here, there, and everywhere, you will never accomplish anything.

Sometimes people get knocked out of their position because of circumstances. Unfortunately, some never fully recover to where they could have been if they had stayed where they were supposed to be.

Others refuse to let anything knock them out of their positions. They make continual progress even when they encounter tremendous opposition.

One of the secrets to success is learning how to stay put when circumstances come against us. We can learn a lesson on how to stand by looking at the life of Moses. He was a great leader but he had to learn to stay in position.

EXODUS 14:13–14 (NKJV)
13 And Moses said to the people, "Do not be afraid. Stand still, and see the salvation of the Lord, which He will accomplish for you today. For the Egyptians whom you see today, you shall see again no more forever.
14 The Lord will fight for you, and you shall hold your peace."

After the Israelites fled Egypt, they found themselves in a hard place. The Egyptian army was behind them. The Red Sea was in front of them and mountains surrounded them. They faced obstacles on every side.

It may not have made sense, but "standing still" put the Israelites in position to move when God told them to go.

In the Center of God's Will

In our lives, we want to be in God's perfect will. Getting out of position can cost us. We see in the Bible where God called people to certain places. If they hadn't stayed where they were supposed to, they wouldn't have been blessed.

God called Abraham to a certain land and that's where he was blessed. Moses was called to lead the Israelites out of Egypt. If Moses had stayed in Midian, we wouldn't have heard of him today.

God wants all of us to be successful and live victoriously in Him. Being in the right place and maintaining that position is vital for our success in the Kingdom of God.

First Corinthians 15:58 (NIV) says, "Therefore, my dear brothers and sisters, stand firm. Let nothing move you. Always give yourselves fully to the work of the Lord, because you know that your labor in the Lord is not in vain."

Whatever position in life God has for us is important. He needs us working in it. We need to learn to stand in it, take some initiative, and be engaged in that position. In the same way a minister prays for the anointing to get up and speak, pray for the anointing to do your job.

Out Front vs. Behind the Scenes

Some people have visible positions that appear to be more important than others. On a football team, there are quarterbacks, running backs, and wide receivers. The people in these positions seem to get all the glory.

But it's the people who are in positions that aren't visible that make the visible positions successful. The quarterback can't complete a pass if the offensive line doesn't block for him. Likewise, the running back won't gain any yardage if someone doesn't keep him from being tackled.

It's the same way in the Kingdom of God. Every position on God's team is important.

In church, the pastor has the most visible position. But he can't do it all. It's the people behind the scenes that make the church function as it should.

All churches are more than the pastor. The pastor leads the church, but the church's success is a team effort. When everyone on the team stands in their position and does what they're called to do, everything works well.

When we're in our position and adversity comes, we have to be determined to stay in our place. Ephesians 6:10 (NKJV) encourages us to "be strong in the Lord and in the power of His might." Verse 11 goes on to say that we can stand against the attacks of the devil when we put on the whole armor of God.

This is how we stand strong in the Lord, resting in His power, and doing what we're supposed to do.

So when undesirable circumstances come, resist the idea to cut and run. No one likes pressure, but success never comes when we run away. Instead, we must decide to depend on God to help us stand. When it seems like everything is coming against us, standing in the power of His might comes when we know who we are in Christ.

Successful military campaigns require a supply line of ammunition. Any military unit that has ammunition and the necessary resources, can push back the enemy.

The same is true with us. When we're standing on the promises of God in His perfect will, we have a supply line. All of the resources we need are found in the Word of God. Speaking the Word is our ammunition to defeat the enemy. It will give us strength on the inside to stand our ground.

Let's be determined not to allow anything to move us from our God-ordained positions. We must stay where we are until we accomplish everything God wants us to do. Being in the right position is when we will experience our best blessings. Let's do all we can for the Kingdom of God as we stand in our position for success!

DID YOU ENJOY THIS ARTICLE?

Go to: bit.do/standyourground to watch Kenneth W. Hagin teach on how to "Stand Your Ground" at Rhema Bible Church.