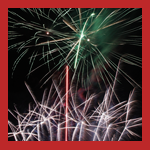 AS STORMS THREATENED in the distance, Rockets Over Rhema began with a bang. The talented members of Rhema Bible Church shared their hearts and passions with the patriotic musical Let Freedom Ring! Between the videos, music, and skits, the auditorium was filled with laughter and standing ovations honoring those in the United States armed forces.

The joyful showcase was not dampened by the rain that swept across the campus. Awaiting dry skies outside were inflatable games, face painting, an array of vehicles in the car show, and the delicious carnival-style food fare. Synergy Band moved indoors to the Rhema Bible Church auditorium stage and kicked off the concert.

After the rain ceased, crowds streamed onto the Rhema campus. Delicacies such as fried cheese and funnel cakes appeared in people's hands. Families roamed the kid-friendly fun, registered for giveaways, and picked the perfect spot to watch the fireworks. Light-up swords seemed to multiply as dusk deepened.

On the outdoor stage, Kenneth and Lynette Hagin greeted everyone and praised God for the turn in the weather. It was a testimony of faith in action with Kenneth Hagin's confession, "I cannot be defeated, and I will not quit. We're having Rockets!" Since it began in 2004, Rockets Over Rhema has never been cancelled because of bad weather.

The Christian rock band Abandon echoed the sentiment with the song "Warrior" from their Love Prevails album. Nearly 2,000 people viewed the live video clip on Facebook.

The Afters took the stage and proceeded to pour out heart, soul, and music to bring people closer to the Lord and lead up to the much-anticipated fireworks display.

When the lights dimmed throughout the campus, a wave of expectation rippled through the masses and erupted with the first explosion. Amidst the oohs and aahs, the fiery testament was launched high into the night sky in celebration of freedom—both as a nation and as Christians.

If you're looking for a destination getaway to celebrate Independence Day (USA), mark your calendars for July 1, 2018, and join us!