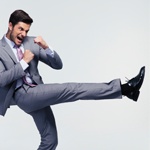 SECOND CORINTHIANS 4:13 (NKJV) says, "Since we have the same spirit of faith, according to what is written, 'I believed and therefore I spoke,' we also believe and therefore speak."

Paul is not talking here about a literal spirit. He is talking about a spiritual attitude in a person. This is the attitude of faith. Paul was quoting what David said in Psalm 116:10, and Paul declared that he had the same spirit or attitude of faith that David had. Notice that Paul didn't say I—he said we. We have the same spirit of faith. Paul was writing to the Church at Corinth, but that's for us too. It's for all believers. So this means that not only David and Paul could have this attitude of faith, but every believer can have this same attitude.

Kenneth Hagin Ministries is built on the cornerstone of faith. Kenneth E. Hagin, my dad, founded the ministry, and I grew up in his home. As far back as I remember, he always had the attitude of faith concerning healing, because he was raised off the bed of sickness through faith in God's Word.* But in the beginning, he didn't have the attitude of faith about finances.

You see, you can have an attitude of faith in one area and not have it in another area. When we were sick, we always got healed. But man, we were on the bottom of the barrel financially. In fact, we were actually under the barrel!

Developing an Attitude of Faith

I watched as Dad learned how to have an attitude of faith for finances, both for us personally and for the ministry. We went through some difficult times, but he never changed what he believed, and he never changed his confession of the Word of God. He developed what a lot of people called an invincible attitude of faith. But he just believed that God's Word would prevail over anything and that we could have victory.

After watching Dad demonstrate this spirit of faith and listening to him teach the principles, I began to adopt the same attitude. The attitude of faith believes that whatever God said in His Word will happen.

We see the attitude of faith being demonstrated in Mark chapter 11. Jesus and His disciples were on the way to Jerusalem when Jesus saw a fig tree. When He looked for fruit on the tree, He found none. He said to the tree, "Let no one eat fruit from you ever again" (v. 14 NKJV). Let's pick up the rest of the story in verse 20.

20 Now in the morning, as they passed by, they saw the fig tree dried up from the roots.
21 And Peter, remembering, said to Him, "Rabbi, look! The fig tree which You cursed has withered away."
22 So Jesus answered and said to them, "Have faith in God.
23 For assuredly, I say to you, whoever says to this mountain, 'Be removed and be cast into the sea,' and does not doubt in his heart, but believes that those things he says will be done, he will have whatever he says.
24 Therefore I say to you, whatever things you ask when you pray, believe that you receive them, and you will have them."

Now, verse 22 says, "Have faith in God," or "Have the God-kind of faith." This is beyond normal thinking. A person with the attitude of faith believes in his heart and says with his mouth.

Jesus is not talking here about principles of faith—He is talking about an attitude. Faith is not a mechanical function of knowledge. It's not operating some formula. It's a spiritual operation in your heart. It's an attitude in your heart that you express through your mouth.

Jesus had a spirit of faith—an attitude of faith. He didn't doubt. He didn't hide someplace and watch to see what would happen to the fig tree. He didn't beg God to make what He said come to pass.

In verse 22, Jesus was telling His disciples, "I did this by faith. And you can have the same kind of faith." And we can have that kind of faith too. It comes by hearing and hearing the Word of God (Rom. 10:17). The attitude of faith comes from knowing God's promises.

There are principles of faith. But the attitude of faith is what drives you to get the job done. The principles just give you the foundation on which to operate.

Luke 18:27 is my favorite verse. If anybody asks me to sign my name, I always add that reference. It says, "The things which are impossible with men are possible with God" (NKJV).

God looks at things according to what His Word says and what His power is. He is never in a panic. He is never devastated by any earthly situation.

* Kenneth E. Hagin's testimony of how God raised him off a deathbed is included in his book I Believe in Visions, available through Faith Library Publications.

Faith in the Promises of God

To maintain an attitude of faith, do the following:

FOCUS continually on the promises of God.

ACKNOWLEDGE that God's promises are possible for you all the time.

INSIST that God's promises are coming to pass in your life.

THINK and MEDITATE on God's promises.

HOLD ON to your confession of God's promises.

Did this article encourage you? Tell us about it! Just #RhemaWOF on social media.