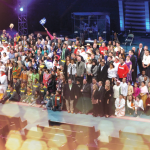 Looking back at a great year!

Kenneth and Lynette Hagin and the rest of the crusade team traveled to 11 cities, and at each one, the Holy Spirit manifested His gifts. The Hagins have sought for years to flow with the Holy Ghost, and it was clear that whichever way He moved, they endeavored to follow.

In every service where people hungrily pulled on the Spirit of God, a heavy, tangible anointing was felt. The end result: miracles and transformed lives across the U.S.

At the Omaha, Nebraska, crusade in April, the Hagins learned that a surgeon had accidentally cut the esophagus of a 14-month-old toddler. A team of five surgeons—experts in their field—were called in to figure out how to repair the damage. But after the long, grueling surgery, they emerged from the operating room with a grim prognosis: the youngster would probably never be able to swallow and would have to be fed through a stomach tube for the rest of his life. His desperate grandmother called Faith Family Church where the Hagins "just happened" to be holding a Living Faith Crusade.

That morning Lynette, ministering under an especially strong anointing, declared breakthrough over the church. Then Pastor Tony Finley led the congregation in praying for a miracle for the young boy. By that evening's service, word came that the child was standing up in his crib, swallowing, and eating!

Kenneth E. Hagin was known to say, "The spiritual tides are rising." And it was clear this year to the crusade team that this was happening. Kenneth and Lynette found themselves ministering on a higher level, and God did many wonderful things.

You'll want to get to the nearest Living Faith Crusade in 2015. There's no telling what will happen. But be sure to come expecting.

Rhema Bible Training College
40 Years! Turning 40 is a milestone many people don't like to think about. But not Rhema! This year, RBTC USA celebrated its 40th birthday, and the school shows no signs of slowing down. Plenty of people around the world still need to hear the Gospel of Christ. That means more believers must be trained to boldly and fearlessly share God's love with the lost.

Spring Enrollment
When applying to RBTC USA, two options are now available. January 2014 saw the first group of spring enrollees begin their studies. With Rhema's new Core Program, it's now possible for students to enroll at Rhema in
either January or September.

There's No Place Like Home The opening of Rhema campuses around the world has been a dream come true for many people in other lands. Men and women on 191 campuses in 46 nations are now able to receive the same training as Rhema USA students. Imagine how thrilled students and grads from 39 of those countries were to be able to "come home" to Broken Arrow, Oklahoma, for Winter Bible Seminar and Worldwide Homecoming 2014. Some cried; others were in awe. All of them were blessed. For one week in February, more than 500 internationals descended on Rhema USA. What a glorious time it was! For a taste of the "Heaven on earth" they experienced, go to khm.com/revelationsong​ and listen to "Revelation Song" performed by worship leaders from nine nations.

Spring Break Fun What college student doesn't look forward to spring break? But for RBTC students, instead of sleeping late, many travel to other nations to see the lost saved and the sick healed.

In March, a group of 21 from Rhema USA eagerly embarked on a trip to Zambia, and Lusaka, the nation's capital, will never be the same. As group members ministered, they saw 534 people saved, 497 healed, and 491 receive the baptism in the Holy Spirit and speak in tongues. Seeing God demonstrate His power is a lot more fun than a few extra hours of sleep!

Saying Goodbye to Cooper Beaty
Saying goodbye to those we love is never easy. On Monday, May 5, 2014, we bid farewell to Cooper Beaty, 97, an RBTC instructor for 30 years. He was affectionately known as "Machine Gun" Beaty because of his rapid-fire teaching style. We will miss his wit, wisdom, and boundless energy. Until we meet again. . .

Going South of the Border
In May, Kenneth and Lynette headed for Latin America. They traveled 12,441 air miles in 14 days to visit Rhema schools, graduates, and supporters in Brazil, Argentina, Peru, Colombia, and Mexico.

The extended Rhema family greatly
enjoys visits from the Hagins. When they ministered in Argentina, a church from Uruguay joined the service via the Internet. So many people tried to watch online that the church Web page crashed! All the more evidence that people everywhere are crying out to hear the message of faith—a message that transforms lives.

Lighting Up the World
God's light shines on the Rhema
USA Campus in many ways. Once again this year, the Rockets Over Rhema Independence Day celebration drew tens of thousands of onlookers and lit up the night sky with dazzling fireworks. On a quieter note, from Thanksgiving through New Year's Day, the Rhema Park and campus were awash in a sea of thousands of tiny lights commemorating Christ's birth. Both events are intended to express God's love to the surrounding communities.