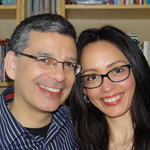 By the time she was a teenager, Adriana was an atheist. She simply couldn't believe in a God Who would allow her to grow up in a dysfunctional home filled with chaos and fear. Deeply troubled, she considered suicide. But even that fell through. Nothing, it seemed, was going her way.

With nowhere to turn, Adriana found herself surrounded by darkness in her home country of Brazil. One of her friends was dabbling with demonic possession. Face to face with evil, she realized that the devil was real. But if he was real, she concluded that God must be real as well. And at age 18, Adriana was born again. "I fell in love with the Lord," she remembered. "He became my everything."

Though her life was turning around, Adriana still carried a lot of emotional baggage. But one year after her salvation, she met a group of believers, one of whom loaned her a book in Portuguese. That book was How You Can Be Led by the Spirit of God by Kenneth E. Hagin.

Hungry for the Word, Adriana devoured that book—and all of the other Hagin books loaned to her. Eventually, she found out about a Bible school started in Brazil by two Rhema USA graduates—Bud and Jan Wright. She gave up her job and moved 500 miles to attend.

"The teaching of the Word of God at Rhema set me free," Adriana exclaimed. "And it still sets me free because it's a process for your soul—your mind—to be renewed. It's exciting because it never ends. You are always knowing the Lord more. You are always growing more. His Word changed my life completely and is still changing me."

In 1998 Adriana graduated from the school which would eventually become Rhema Bible Training College Brazil.

Simon
Born in England, Simon Potter grew up in church. He knew about Jesus and believed He existed. What he didn't know was that you had to be born again. His church didn't teach that.

But at age 16, through a revival in his school, God got hold of him. Then, in his last year of university, Simon was filled with the Spirit. "It was like being born again—again," he exclaimed. "I didn't realize at the time that the man who prayed with me used Kenneth E. Hagin's book Seven Vital Steps to Receiving the Holy Spirit. But he introduced me to the word of faith message and Kenneth E. Hagin."

That introduction left Simon wanting more. In 1989, at the Lord's direction, he packed his bags and headed to the States to attend Rhema Bible Training College USA. "I wanted to go somewhere that would teach me how to be me as a minister," he said. "And Rhema did that."

After graduating in 1991, Simon returned to England to help his friends and fellow Rhema graduates Derek and Hilary Walker start a church. In 1993 he began traveling around the world to minister. "I never felt fixed," he recalled. "I knew I was supposed to be moving."

And move he did! India, Eastern Europe, Latvia . . . he lived like a nomad traveling and ministering 280 days of the year. In 1999 he landed in Brazil for the first time. To be precise, he landed on Adriana's doorstep.

A God Story
"It's kind of weird how God works sometimes," Simon laughed. "I'd done my degree in Japanese at university. I had a heart for the Japanese people. I heard that the largest Japanese population outside of Japan is in Brazil. That was the hook God used to put Brazil on my radar and in my heart."

Interestingly, one of the cities God placed on Simon's heart for that trip was Fortaleza—Adriana's hometown. He ended up holding a meeting in her church, and that's where they first met.

For Adriana, it was like something exploded inside her. A few months before, a woman had told her, "I had a vision. I saw your husband. I saw you both traveling the world and going to many nations." Adriana had kept those words to herself, trusting God to make it happen. When Simon came, she knew in her heart that he was the man in the vision. Still, she kept it to herself. If God said it, He would bring it to pass.

Over the next two years, Simon and Adriana saw each other only twice. Busy with ministry, Simon remained oblivious to Adriana. She continued working in her local church and even began teaching in the Bible school. It wasn't until they were asked to collaborate on some missions trips that God began to work on Simon's heart.

"It was like the Lord was directing me to look in Adriana's direction," Simon explained. That was in September 2001—and Adriana couldn't have been happier. By January of the following year, she and Simon were married.

The Mission
Today Simon and Adriana are based in Oxford, England. They help in their local church, but they've also been itinerant missionaries together since 2002. As a team, they've been to Asia, South America, Japan, the Russian far east, the Philippines, and other locations. They minister in Bible schools, churches, conferences—and wherever else the Lord leads.

Every place Simon and Adriana go, their ministry is different. At times they'll go places just to fellowship with people and encourage them. "Different places pull different things out of you," Simon observed.

"We're called to go and help strengthen the works that exist," he continued. "We want to help things take deeper root, because when the roots are deep those works can really take off."

The Results
Everywhere they go, Simon and Adriana are seeing results. People are being set free from bad habits. Families are experiencing restoration. Those who have been in bondage to religious tradition are finding freedom.

In one country Simon taught a course on the Blood Covenant. One of the men in attendance shared the MP3 messages with his pastor, who had been facing a lot of sickness in his family. After he listened to those messages, everything changed. The pastor said, "That word changed my family's health. Our days of sickness and hospital are gone!"

"People out there know so little—even ministers," Adriana noted. "They haven't been trained. You see that need and your heart aches. But that's the teaching Rhema is giving to people."

No matter what the future holds for Simon and Adriana, they're ready. It doesn't matter to them where they live. Even what they're doing doesn't matter. What matters to them is that they're doing what God has told them to do. "We want to be flexible in His hands," Simon said. "We do our part, and God does His."