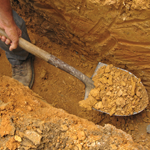 Did you ever notice that sometimes the Lord will tell you to do something that doesn't sound right in the natural?

In Second Kings chapter 3, we find three kings in a very bad situation. Jehoram, king of Israel, Jehoshaphat, king of Judah, and the king of Edom have marched their armies into the desert to fight against Moab. Now, seven days in, they find themselves without water for their men or animals.

He wasn't serving the Lord. But King Jehoshaphat knew about God's power. In verse 11 (NKJV) he asks, " 'Is there no prophet of the Lord here, that we may inquire of the Lord by him?' " And a servant directed them to the prophet Elisha.

Now if it hadn't been for the faithful king of Judah, Elisha wouldn't have given King Jehoram the time of day (2 Kings 3:13–14). But as the musician began to play, the word of the Lord came through him. Let's pick up the story here.

2 KINGS 3:16–20 (NKJV)
16 And he [Elisha] said, "Thus says the Lord: 'MAKE THIS VALLEY FULL OF DITCHES.'
17 For thus says the Lord: 'You shall not see wind, nor shall you see rain; yet that valley shall be filled with water, so that you, your cattle, and your animals may drink.'
18 And this is a simple matter in the sight of the Lord; He will also deliver the Moabites into your hand.

19 Also you shall attack every fortified city and every choice city, and shall cut down every good tree, and stop up every spring of water, and ruin every good piece of land with stones."
20 Now it happened in the morning, when the grain offering was offered, that suddenly water came by way of Edom, and the land was filled with water.

These kings are in the desert—in a low, dry place—and the Lord says, "Dig ditches." Sounds sort of crazy, doesn't it?

If you've ever dug ditches before, you know it's hard work anytime. But it's extra hard work when the ground is dry and hard. To add to that, these men are thirsty!

Nonetheless, they followed the Lord's direction. They filled that valley with ditches. And the next morning, those ditches were filled with water—just as the Lord had said! Hallelujah!

You have to make up your mind that you're going to hold on to the promises of God. You've got to keep digging!

I know it's hard work. I know it's difficult. And I also know it doesn't make sense sometimes. But keep digging! Keep praying, praising, speaking the Word, and sowing! Keep going to church.

Don't grow weary in well doing. The Word says that in due season, you will reap if you don't quit (Gal. 6:9).

Start praising the Lord as if the doors of opportunity have already swung open wide! The water is on the way! Joy is just around the corner.

Take Back What Belongs to You
I want you to notice something about the story of the three kings in the desert. God not only told them He'd provide water, but He also promised, "I'm going to deliver these Moabites into your hands. You're going to tear up every city. You're going to cut down every tree."

In other words, God is not just going to fill up your ditches. He's going to give you the power to walk into the enemy's camp and take back everything that belongs to you!

You're not going to die in the desert! It is a new season. And if you'll begin to dig some deep ditches for the blessings of God and praise Him, He will bring you out of that low place.

This is your day! This is your hour! Whatever it is you're facing, dig your ditch a little deeper. God is going to meet your needs!

For 10 years, every time Lynette and I prayed over our food, we'd say, "Thank You, Lord, the Rhema aircraft is paid off." We just kept digging that ditch—every day!

In April 2013, we made the last payment on the aircraft. We were so excited, and we thanked God for it. But Lynette also wondered why it had taken so long. She said, "Lord, I'm not complaining, but I thought it would be paid off sooner."

God told her, "You never were late on a payment. You never
missed a payment. It was your praising and speaking that kept the money coming every month for you to make the payment. So now, it's paid off!"

Perhaps you have been believing God for something, and you've been digging and digging and digging. Don't stop! God will supply what you need. It might not happen the way you think it will. But when you keep digging, He will provide!