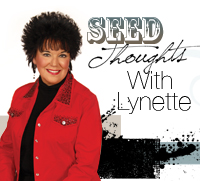 I am sure that most of you are thinking about the holidays. I know that I have been mentally preparing myself for this busy season. As I began to reflect on the busyness of the schedule, my mind wanted to panic and begin thinking about being tired and worn out even before the events occurred.

This is a time when you can let your thoughts put you into a state of panic and distress. So many allow panic to dominate them, and they live in constant turmoil. Our world is fast-paced, whether it is the holidays or not. One might call me simple, but I have found that the Word of God always ministers peace to me in every stressful situation. 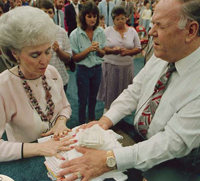 Jesus used different methods to minister healing to people. He told a lame man to “rise, take up your bed, and walk,” and the crippled man was healed. A blind man was healed after he washed mud from his eyes in the pool of Siloam. Jesus told 10 lepers to show themselves to the priest, and as they went, they were healed. A deaf man who could hardly talk was healed after Jesus put His fingers in the man’s ears, spit, and then touched the man’s tongue. The most prominent way Jesus healed was by the laying on of hands. People also sought to touch Him. And the woman with the issue of blood was healed after touching the hem of His garment. 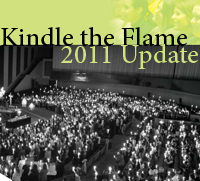 Lynette Hagin’s Kindle the Flame® Women’s Conference keeps getting better and better. Women from across the U.S. and as far away as Norway, Germany, Zambia, and Australia came to be refreshed and recharged. And they weren’t disappointed. Lynette encouraged the women to let go of baggage—the weights and bondages that keep them bound. All of the speakers’ messages dovetailed perfectly with each other to create a totally unforgettable experience for everyone who came. 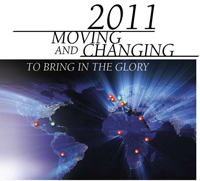 In 1973 when Kenneth E. Hagin said, “We’re going to start a Bible school,” who would have thought that less than 40 years later there would be more than 100 campuses worldwide with over 50,000 graduates? 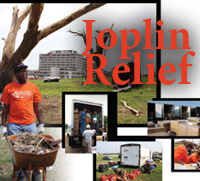 People have compared the sound of a tornado to a passing freight train. To one survivor of the EF-5 tornado that devastated Joplin, Missouri, on Sunday, May 22, 2011, the roar sounded as though he was lying next to the tracks with the train rumbling by at full throttle. It lasted only a minute or two, but to him it felt like an eternity. “It just didn’t end,” he said. “I’ve done a lot of stupid things, but this was the first time in my life that I truly thought I was going to die.”