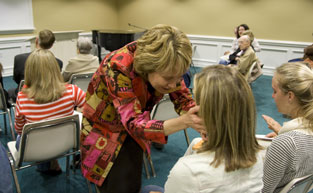 As a teenager, Kenneth E. Hagin lay paralyzed for many months, seemingly destined to die. His heart cried out for someone to encourage him to believe that he could be healed. But the few people he asked for help only told him to prepare for death.

By the grace of God and young Kenneth's determined study of God's Word, faith finally was quickened in his heart for him to believe for his healing. On August 8, 1934, he was raised off the bed of sickness by the power of God, completely healed and made whole.

As a minister of the Gospel, Rev. Hagin long carried a dream in his heart to help those who suffered in pain and sickness the way he himself had once suffered. He wanted to provide a place where the sick could come and have faith put into them, rather than have it taken out of them through religious tradition and unbelief.

The Lord put it on Rev. Hagin's heart to start Prayer and Healing School, and the first classes were held in 1979.

The Prayer & Healing Center is centrally located on the RHEMA campus in facilities completed in 1982. The building was beautifully renovated in 2002 and provides a peaceful environment in which people can begin to expect to receive from God. From here, staff members coordinate several prayer and healing outreaches.