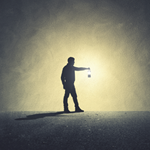 PEOPLE OFTEN BECOME fearful when diagnosed with a life-threatening illness. Time and time again, I have seen fear grip people's hearts when doctors tell them that there is nothing more medical science can do for them.

I understand what it is like to receive bad news from a doctor. When I was 13 years old, I was having severe headaches. I found out that I had a brain tumor. It was about the size of my fist and was located at the base of my skull.

When the doctor talked to my parents and me, he told us he had to operate immediately. As he explained the surgery to us, he said he was concerned about how close the tumor was to my brain stem. If he touched my brain stem during surgery, I would die. The good news, however, was that the survival rate from this type of surgery was 80 percent.

But I thank God that I was taught well. I took authority over the fear and cast it from my mind. I made myself think on the Word of God and the 80 percent chance of going through the surgery without complications. The operation was textbook perfect. The surgeon removed most of the tumor, and God removed the rest. I was completely healed.

The Enemy of Faith

Fear is an enemy of faith. It will stop the power of God from working in our lives. Faith is having an unquestioning belief in God. Fear, on the other hand, makes us question and ask things such as, "Will I make it?" Faith doesn't question. It has complete confidence and trust in God.

Second Timothy 1:7 says, "For God hath not given us the spirit of fear; but of power, and of love, and of a sound mind." Fear is not from God; it's from the devil. And fear is one of the biggest hindrances to people receiving their healing. They may start out in faith, but when fear grabs hold of their hearts, their faith begins to sputter.

The devil often tries to put thoughts in our minds when we're alone. It's easy to become fearful when nobody is around to pray with us or encourage us. James the brother of Jesus told us that when we resist the devil, he will flee from us (James 4:7). One way to resist him is by not allowing ourselves to think about things that are contrary to the Word of God. Or as Second Corinthians 10:5 says, "casting down" these types of thoughts.

When fear tries to come on us, we simply have to say, "Satan, you have no right or authority to put a spirit of fear on me. I command fear to leave now, in the Name of Jesus."

We then need to follow the example Paul and Silas gave us when they were thrown in jail. Scripture says that at midnight they began to pray and sing praises to God (Acts 16:25).

Although Paul and Silas were praising God at the midnight hour, "midnight" can happen at any time of the day. For example, we can learn of bad news in the middle of the day. Suddenly, things can seem to close in on us and it feels like midnight.

And like Paul and Silas, we need to sing praises to God during our midnight hour. You see, it's hard for us to feel bad when we are worshipping and praising God. That's because we're reminding ourselves of how good God is. We're remembering that God will never leave us nor forsake us (Heb. 13:5) and that He is always there for us.

When Paul and Silas began to praise God, a great earthquake opened the prison doors and loosed the shackles that bound the prisoners (Acts 16:26).

Anytime we receive bad news from a doctor, let's remember that the Greater One dwells on the inside of us (1 John 4:4). No matter what the doctor says, the peace of God that passes all understanding can keep our hearts and minds (Phil. 4:7). Things that may be impossible with men are possible with God (Luke 18:27). We don't have to fear because God is on our side, and He will surely see us through.

[Editor's Note: This article was previously published in the Word of Faith magazine September 2010.]

Peace in the Midst of a Storm
The Book of Matthew records a time when Jesus and His disciples were in a ship when a violent storm arose. Although the disciples had already seen Jesus raise the dead, heal the sick, and cast out demons, they became fearful. They thought they were going to die. Jesus was sound asleep when the disciples woke Him saying, "Lord, save us: we perish" (Matt. 8:25).

When Jesus awoke, the disciples' alarming words didn't frighten Him. Instead, He rebuked His disciples for being afraid, and then He rebuked the storm: "Why are ye fearful, O ye of little faith? Then he arose, and rebuked the winds and the sea; and there was a great calm" (Matt. 8:26).

Today, Jesus lives inside us (Rom. 8:11). No matter where we go, He is with us. When the storms of life surround us, we can rebuke them in the Name of Jesus and expect a great calm to settle upon us.