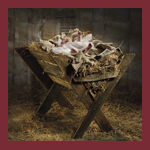 WHAT DOES THE BIRTH of Jesus mean to you? One thing that it should mean to all of us is that through Christ we gain the ultimate victory. Jesus was born more than 2,000 years ago to end Satan's rule over mankind. But the Christmas story doesn't start in the town of Bethlehem. It begins in the Book of Genesis.

After God created Adam, He placed him in the Garden of Eden where He walked and talked with him every day. God brought every animal and bird to Adam to see what he would call them (Gen. 2:19). And He gave Adam dominion over every creature (Gen.1:28).

Eventually, Satan deceived Eve, and Adam sinned. The two became separated from the Creator, their loving Heavenly Father. Satan thought he'd won a victory. He thought that mankind would never be able to connect with God again.

But I can imagine God saying one day in Heaven, "I want to redeem My man. Who is willing to go?" All of Heaven was silent. None of the angels moved or raised a hand. Then One stepped forward and said, "Father, I'll go."

On a starry night, Jesus was born in Bethlehem and laid in a manger made of wood. He lived a sinless life—only to be crucified and nailed to a cross made of wood on Calvary's hill.

First John 3:8 (NKJV) says, "For this purpose the Son of God was manifested, that He might destroy the works of the devil." Through His birth, death, and resurrection, Jesus ended Satan's rule over every person who would simply believe on Him as Savior.

The beauty of the Christmas story is that the only reason Jesus became the Babe of Bethlehem was for you and me. He made a way for us not only to commune once again with God but also to experience victory over all of life's circumstances.

People everywhere deal with situations. Many have troubles in their families, jobs, and finances. Others have suffered tragedies and confront health issues. The Good News from the Christmas story is that Jesus can help us with all of these problems. He lived as a man to show us that we can overcome anything and live victoriously on the earth.

John 10:10 Amplified says, "I came that they may have and enjoy life, and have it in abundance [to the full, till it overflows]." Because of Jesus, our needs are met spiritually, physically, financially, emotionally, and every other way.

Jesus is called Emmanuel, which means "God with us" (Matt. 1:23). We are not destitute. El Shaddai—the God Who is more than enough—is with us, and He promises never to leave us nor forsake us (Heb. 13:5).

The Christmas story is not just about a stable, a baby in a manger, shepherds, and wise men. It's about the power of God. The power that brought the Christ child to earth is the same power that delivers us from adversity and helps us with every need.

The victory that was won so long ago is still available to us today. Scripture is filled with verses that guarantee our victory over any problem.

"In all these things we are more than conquerors through Him who loved us" (Rom. 8:37 NKJV).

The Christmas story is the ultimate story because it frees us from bondage and enables us to live as overcomers. Victory is possible for us only because of the day Jesus was born. Christmas is our ultimate victory!

The Greatest Love Story Ever Told!

The Christmas story is the ultimate story. The word ultimate means that it's the best. There isn't any story that's better. In this one tale, we read about the greatest power, the greatest revelation, the greatest victory, and the greatest gift ever known to mankind. By far, it is the greatest love story that was ever recorded in all of human history. The birth of the Babe of Bethlehem is an impossible story that was made possible by the power of God. We also see God's guidance, mercy, and protection. Below are six points that are clearly evident in this wonderful story.

1. GOD LOVES US. "For God so loved the world, that he gave his only begotten Son, that whosoever believeth in him should not perish, but have everlasting life" (John 3:16).

4. ALL THINGS ARE POSSIBLE WITH GOD. "The things which are impossible with men are possible with God" (Luke 18:27).

5. GOD GIVES US STRENGTH WHEN WE ARE INCAPABLE. "He gives strength to the weary and increases the power of the weak" (Isa. 40:29 NIV).

6. No matter what we're facing in life if we'll FOLLOW GOD'S LEADING, He will cause us to come out on top. "Now thanks be to God who always leads us in triumph in Christ" (2 Cor. 2:14 NKJV).