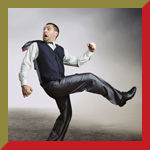 TO WALK in the power of God and bring supernatural deliverance in people's lives, we have to get bold with the devil. I say this because too many believers act as though they are afraid of Satan and demonic power. It doesn't have to be this way when we know who we are in Christ and operate in the power of the Holy Spirit.

Some teach that when the first apostles died, so did the power of God. They say that today people get saved, deal with the devil as best they can, and go to Heaven when they die. That should not be so! We are part of the same Church the early fathers were a part of. And the Word of God says that the glory of the latter house will be more than that of the former house (Hag. 2:9). That means we must be bold with the devil.

I believe we are in the beginning of the greatest revival the world has ever known, because this revival will be the last revival. As we read the world news, it is like reading Jesus' words in Matthew chapter 24 or Daniel's vision in Daniel chapter 7.

Everything the Bible prophesied is falling into place. Countries and kingdoms are taking their places. People are being put in position for the last days, and the devil knows his time is running out.

Unfortunately, a lot of Christians are running scared. Some have never understood the power they have over Satan through the blood of Jesus Christ. Others have forgotten that they have that power. If we understand the power of the blood, when things get tough, we get tougher!

Jesus was in the grave for three days. During that time He met the enemy face-to-face and stripped him of all authority and power (Col. 2:15). Then He rose from the dead with the keys of death and hell in His grip (Rev. 1:18).

Jesus triumphed over Satan and all demonic powers by the cross. He became sin so you and I could walk in His victory. The same Spirit that raised Jesus from the dead dwells in us

(Rom. 8:11). We carry His resurrection power, and God put it in us for a purpose. We are to do the works Jesus did, bring Heaven to earth, and crush the enemy whenever he shows his ugly head.

Peter and Paul spoke of the works Jesus did while He was on the earth. In Acts 10:38 (NIV), Peter said that Jesus "went around doing good and healing all who were under the power of the devil." Christians should be doing those same works now.

Jesus announced His ministry by saying that God had anointed Him to heal everyone who was under the devil's power and to set the captives free (Luke 4:18–19). We need to realize that God has anointed us too! We are anointed, not because of anything we have done, but because of what Jesus did on the cross.

Because of the cross, what Jesus did in His earthly ministry has become a pattern for how we should live each day. We are to preach the Gospel, heal the sick, and bring deliverance to the captives. That means we need to be bold with the devil. And we can get bold when we walk in the power of the blood of the Lamb.

First John 2:20 (NIV) says that we have an anointing from the Holy One and know the truth. We know about the power of the blood. We know the Holy Spirit Who lives in us and has anointed us to win every wrestling match we have with the enemy. The preacher and the healing evangelist aren't the only ones anointed by God. All Christians are anointed by God.

We must remember that what happens in the spirit realm determines what happens in the natural realm. And the devil and his demons are no match for the Holy Spirit and the hosts of Heaven. The power and authority Jesus gave us trumps any agenda the enemy might use against us.

Nevertheless, Satan and his demonic cohorts are doing everything they can to stop us from fulfilling the Great Commission. They will do anything they can to keep us from doing the will of God. They usually do this through other people, sometimes even believers.

Our fight is not with the people who cause us grief. Our fight is a spiritual battle. We wrestle with demonic principalities and powers that are influencing people to try to prevent us from doing God's will. A wrestling match is going on in the spirit realm between the power of God and the forces of evil. And we are right in the middle of it.

The good news is that God has placed us in a position to change things. We are seated with Jesus at God's right hand. We have His ear and His perspective. According to Matthew 18:18, we can pray and bind the devil from operating through the people in our world.

We don't need to be afraid of the devil, because Jesus already took care of him. All we need to do is use the authority He gave us through His blood over all the power of the enemy.

When we do that, watch out! The explosive power of God will move through us just as it has through countless saints throughout church history. And the devil and his demons will shake in terror at the sight of us!


[Editor's Note: This article was adapted from Kenneth W. Hagin's book Power Up!: Getting Charged With God's Power.]

Where to Keep Your Focus

No matter what adverse circumstances show up, we can experience the victory God intends for us. We can praise Him and thank Him for delivering us out of every trial. But to walk in our God-given triumph, we should keep three "don'ts" in mind.

Instead, praise God. View troubles and problems from Jesus' perspective. He has already overcome the world—and He did it for us!

DON'T BE A PESSIMIST.

Pessimism is doubt in action. Focus on the goodness and power of God. Thank Him that He will do for you what He said in His Word. That will change your outlook.