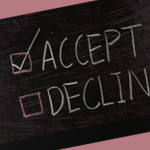 IN MY OPINION, if there is one thing lacking among Charismatic Christians, it's consecration and commitment to God. We need people with backbones like crowbars. Too many have a backbone like a thread. Anybody can twist them around their finger. These people give up too easily, and I don't understand that kind of thinking.

I got saved when I was 15 and was healed when I was almost 17, and I left that bed of sickness preaching. The thought to give up never entered my mind. I sometimes had to work on the side to supplement my income, but the thought never entered my mind to do anything but obey God. I said, "Here I go, live or die, sink or swim, go under or over" (and it looked like I was going to do all of them). But I didn't look back, praise God. I just kept going. I just kept plowing, even when it looked like it was not working. Why? Because I had made a commitment, a dedication, a consecration, and I stayed with it. We need people like that today. Those are the people who will turn the world upside down for Jesus.

Let's look at a passage in Paul's first letter to Timothy.

1 TIMOTHY 4:1–2
1 Now the Spirit speaketh expressly, that in the latter times some shall depart from the faith, giving heed to seducing spirits, and doctrines of devils;
2 Speaking lies in hypocrisy; having their conscience seared with a hot iron.

The Spirit Paul refers to here is the Holy Spirit. And this isn't talking just about sinners. In the end times, even among Christians, some shall depart from the faith. There will be a rise of spiritualism, and people will speak lies in hypocrisy, having their conscience seared. We've had some sad experiences along that line. Not everybody who comes to Rhema turns out marvelously. But where we've had one bad report, thank God we've gotten several dozen good ones.

In fact, I received a letter from a businessman in Broken Arrow, Oklahoma, where Rhema is located, who sent $10,000 to the school. The man wrote a little note, explaining that he felt led of the Lord to sow some seed and invest in Rhema. He said he'd had two students and their wives work for him.

He said, "In honor of these four people, I'm giving $10,000." He saw the fruit of their lives. Thank God we're producing people like that.

God said a number of things to Daniel about the last days, so let's look in the Book of Daniel and notice the fourth verse of chapter 12: "But thou, O Daniel, shut up the words, and seal the book, even to the time of the end."

We see that expression—time of the end, last days, latter times. What about the time of the end? The rest of verse four says, "Many shall run to and fro, and knowledge shall be increased."

I come from the old Model T days. And I can remember the time everybody would run out of the house if just one of those little single-engine airplanes flew over. Think about the cars we have today and think about the improvements they have made in airplanes. Man has even gone to the moon and back! Knowledge shall be increased and men shall run to and fro. When? In the time of the end.

But God does not want us to put our faith in man's wisdom. Paul said, writing to the church at Corinth, "That your faith should not stand in the wisdom of men, but in the power of God" (1 Cor. 2:5).

Now let's look at Luke 21:28: "And when these things begin to come to pass, then look up, and lift up your heads; for your redemption draweth nigh."

First John 3:2–3 says, "Beloved, now are we the sons of God, and . . . we know that, when he shall appear, we shall be like him; for we shall see him as he is. And every man that hath this hope in him purifieth himself, even as he is pure."

That's a strange statement. "I thought God was going to purify us," many will say. There are some things you have to do for yourself.

All the signs point to the fact that Jesus is coming! We have that hope, and it is a purifying hope. People who are living recklessly, carelessly, and impurely are not expecting Him to come. But every person who has this purifying hope in him purifies himself, even as He is pure.

[Editor's Note: This article was adapted from the minibook Signs of the Times by Kenneth E. Hagin.]

Heavenly Father,
I thank You for Your holy written Word. In Your Word we can see many signs that these are the last days and this is the latter time.

Thank You, Father, that we know that when Jesus shall appear, we shall be like Him, for we shall see Him as He is. I have that hope in me, and it is a purifying hope. So I lay aside everything that is unlike You, Lord.

Thank You for the blood of Jesus that cleanses us from all sin. And as Paul said, we lay aside not only every sin, but every weight—those things that are not necessarily sinful, but are weights that hold us back in the Christian race.

We believe Jesus is coming again. We believe there's a work that must be done and a harvest that must come. So we're getting ready for it.

Thank You, Lord, for the day that is coming when the last enemy, physical death, shall be put under foot and our full redemption shall become a reality. Amen.