Yes, there will be challenges to your faith; there will be times when you will be tempted to give up and quit. But what great glory it will bring to God if you keep fighting the fight and running the race! And what a great reward will await you at the finish line!

Fight the good fight of faith, lay hold on eternal life, whereunto thou art also called, and hast professed a good profession before many witnesses. —1 Timothy 6:12

We know from the Word of God that God will meet our needs if we go to Him and ask Him in faith. Yet in this world, we face circumstances that can cause us to falter in our faith. The economy and employment situation, impending wars, the continued threat of terrorism, and the daily life and family issues we face can cause us to quit the fight. But it is in these precise times that we must fight the good fight of faith! 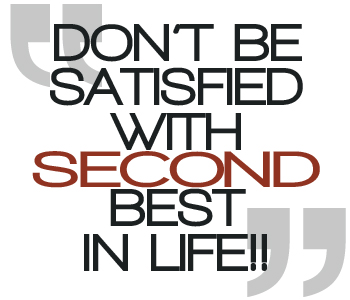 Now is the time for us to believe God and trust in His Word more than ever before. The Bible says in First Timothy 6:12 that we are to fight the good fight of faith. These are the times when we must stand our ground and not quit—even if it looks like we’re going down for the count. Don’t quit! God will cause us to be victorious if we will believe His Word and not give up.

It’s one thing if you quit a fight in the natural. But when we embark upon this spiritual fight and we quit in the middle of it, the consequences can be extremely sobering; whether or not we stay in the fight could mean life or death.

So stay in the fight of faith! Yes, you may lose a round or two in the fight of faith. The devil may take you by surprise, but just because you lose a few rounds doesn’t mean you lose the whole fight. You may come away from that first round or two with a black eye and a bloody nose, so to speak, until you learn how to stand on the Word for your victory. But just because the devil gets in a couple of good licks—maybe a right cross and a left hook, and you may be staggering a little or bouncing off the ropes—that doesn’t mean he’s won the whole fight!

If you will put your trust in the Word of God instead of in what you can do or see in the natural, you will be ready for the next round. Get into God’s Word and get your spiritual muscles built up. Then go back out there and meet the enemy at the center of the ring. Wind up and deliver him a strong, sharp uppercut punch with the Word of God, and knock him right out of that circumstance he’s been holding over your head!

If you’re going to whip the devil in every circumstance of life, you must have the attitude that you refuse to quit and that the devil will not defeat you or take anything that legally belongs to you again! Remember, in Christ, if you’ll stay faithful to God’s Word, you are assured of the victory in every circumstance.

There are too many Christians who are falling for the devil’s lies. When they are just about to achieve victory, the devil starts blowing and huffing and puffing, telling them they will never win. They get scared off and back away from the victory. Instead of pressing on in faith, they begin to say, “Well, I guess I might as well give up! God isn’t going to answer me this time.” And they quit and lay their faith down, and that’s as far as they ever go. They never take another step or make another advance to gain the territory God has already promised them. I didn’t say they weren’t saved; I just said they aren’t advancing toward the blessings God has for them because they’ve listened to the devil’s lies and have given up the fight of faith.

I don’t believe in quitting! I don’t think God believes in quitting, either! In reading the Word of God, you’ll see that the people God used were those who refused to quit! They weren’t people who were necessarily any braver, wiser, or smarter than we are. They were just people with a tenacity and determination of faith who wouldn’t take “no” for an answer! There is an old saying, “Quitters never win, and winners never quit!”

Don’t be satisfied with second best in life! But on the other hand, don’t be upset with yourself if you lose a round or two, because condemnation is the devil’s way to try to get you down. Losing a round or two in a fight does not mean you’ll lose the whole fight! Make up your mind: “I am determined to follow God’s plan for my life. I will not turn aside from following Jesus no matter what!” And if you’re out there in the midst of the fight when the last bell rings, and you’ve been faithful to what God has told you to do, you’re going to be wearing a victor’s crown!

There’s another reason we should never quit fighting the good fight of faith.

32 And what shall I more say? for the time would fail me to tell of Gideon, and of Barak, and of Samson, and of Jephthae; of David also, and Samuel, and of the prophets:

34 Quenched the violence of fire, escaped the edge of the sword, out of weakness were made strong, waxed valiant in fight, turned to flight the armies of the aliens.

So many mighty acts of righteousness have been wrought by men and women refusing to let go of their faith in God that Paul would run out of time if he tried to tell us about them all! These powerful men and women of faith kept their faith in God stalwart and strong in the face of fire, in the face of the lion, and in the face of every obstacle they encountered in life! If they could do it, so can we, because God is the same God now as He was then! What He did for those who trusted Him in the past, He’ll do for us today!

1 Wherefore seeing we also are compassed about with so great a cloud of witnesses, let us lay aside every weight, and the sin which doth so easily beset us, and let us run with patience the race that is set before us.

In this scripture, Paul uses the image of the Greek Olympiad—the ancient Greek games—as an illustration so we can relate to what he is talking about. In ancient Greece, the athletes who competed in this race wore heavy weights on their legs and arms and armor-like plates on their bodies as they trained and prepared for the Greek games. They did this so their bodies would be accustomed to rigorous discipline and hardship—so they would have the endurance, condition, and stamina they would need in the actual contest.

When it came time for the race or the competition in the actual games, those athletes laid aside all those heavy weights. Without all those weights, it seemed as if their bodies were almost weightless; movement seemed effortless, and physical strength and endurance were mightily increased. The stands were full of cheering spectators who watched the athletes as they ran their various races and competed in their great trials of strength and endurance.

Paul uses this imagery of the Greek games as a picture or type of the Christian running the race of life. He’s also saying that we are compassed about with a great cloud of witnesses just as the Greek athletes were surrounded by thousands of spectators cheering them on from the stands. In fact, one translation of this verse says, “Wherefore seeing that we are standing on the playing field with a grandstand full of witnesses, let us lay aside the weights that would try to entangle us.” I can just imagine that great cloud of witnesses—Paul, Peter, Moses, Abraham—the great patriarchs of old and the whole host of our heavenly family—watching from the grandstands of Heaven. Our loved ones who have gone home to be with the Lord are there in that company, too, cheering us on to victory.

When thoughts of defeat are racing through your mind, remember this scripture in Hebrews. Remember that great cloud of witnesses cheering, “Come on! You can make it! The Word says you are more than a conqueror [Rom. 8:37]!” And be encouraged to run your race with patience and with confidence!

Sometimes I just think of that great cloud of witnesses, and it just spurs me on to victory. But in this race, you must also realize that you are going to have to fight the good fight of faith. Refuse to give up on the promises God has given you in His Word! Being strong in faith means that you believe that what God has promised you, He is able to perform (Rom. 4:20–21). 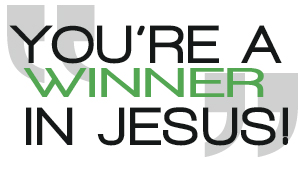 Those Christians who know how to run this race for God by faith are choking Satan to death with the dust from their heels as they run steadily down their course toward victory. Maybe the devil has outrun you and defeated you in your race at one time or another. Don’t let that deter you! You can overcome him if you’ll just get back in the race and start to run again. Run with patience and run by the grace of the Lord Jesus Christ. Always keep in mind that the devil is a defeated foe! Jesus won the victory over him at the Cross of Calvary!

If you’ve been contemplating giving up and quitting, or if you’ve even slowed down to a walk, ask God to forgive you. Turn to Him again, and ask Him for renewed strength. Put your sights again on the victory in spite of your circumstances and on the course God has set for you. Then be diligent to run your race so you can receive your reward. If you’re born again, you’ve begun the race, and there’s no stopping you until Jesus Christ comes in the clouds of glory. Then and only then should you quit fighting the good fight of faith!

I realize that many of you may feel weak in faith; your feet may be hurting and your sides may be aching from the exertion of running your race. The devil would like to make it so convenient for you to stop and sit down a while. He may tell you to stop running—to give up the race. Or he may whisper to you, “Why don’t you stay out of the race just for a little while. But if you do, you’ll lose every inch of ground that it’s taken you months or maybe even years to gain. No—with your faith, press on in the race! Take what belongs to you because of who you are in Christ. You’re a winner in Jesus!