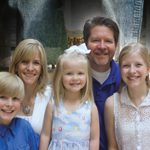 Something was wrong. Doug Mitchell—husband, father of three, and bivocational pastor in Mount Kisco, New York—woke up with a headache unlike any he'd experienced before. It was excruciating—and he was also sick to his stomach.

As the day went on, the pounding in Doug's head only worsened. Nothing he did seemed to make things better. Concerned about dehydration, his wife, Christine, suggested they go to the emergency room. Agreeing, Doug managed to dress himself—a good sign. But then he proceeded to walk the wrong direction to the car. He was disoriented—and things weren't going to improve anytime soon.

At the hospital, Doug and Christine, 1996 Rhema Bible Training College graduates, received terrible news. CT scans revealed a blood clot in Doug's brain. Needing to be sure she understood what the doctor told her, Christine asked, "Are you saying that if we don't do surgery my husband is going to die?" The answer was yes. Doug needed emergency brain surgery.

The Rhema Family
Faced with the impossible, it would have been easy for Christine to fall apart. She couldn't go to Doug for comfort. He was completely out of it from the pain. But her family, church family, and Rhema family were there to help.

Christine received phone calls from all over—including one from Lynette Hagin. "Mrs. Hagin was such a blessing to me," Christine recalled. "She encouraged me and prayed with me. She kept saying, 'All is well.' "

Christine needed those words. Immediately after that phone call, the neurosurgeon came in to show her the images from the CT scan. He pointed out the massive blood clot that filled the entire right side of Doug's head. Then he pointed to a shadowed mass behind the clot. It was a tumor—and the doctor wasn't sure he could do anything about it in this first surgery.

Reeling, Christine returned to Doug's side. She held on to him and began to sing quietly, "Jesus Is My Healer." Though he didn't realize the full severity of the situation, Doug did know one thing. "My course is not finished," he said.

Touch and Go
In the early morning hours of Sunday, February 17, 2013, Doug underwent a five-hour surgery. Christine prayed over him and the surgeon before they went into the operating room. Then she and three women from their church gathered in the ICU waiting room and began to pray in the Holy Ghost. They did this for hours.

When the doctor emerged from the operating room, he had good news. They'd successfully removed the blood clot, but they hadn't seen the tumor. Tests later confirmed what they hadn't found. The tumor was indeed gone! "That was all God," Christine exclaimed!

But Doug's fight was far from over. As he recovered in ICU, his condition was touch and go. His blood pressure would spike and then quickly plummet. He was at a high risk of having a stroke.

Again his family backed him up—and that included the Rhema family. The day Doug had his surgery was the first day of Winter Bible Seminar on the Rhema campus in Broken Arrow, Oklahoma. Kenneth W. Hagin and the Rhema family lifted Doug up in prayer. Those prayers were a lifeline for Doug, Christine, and their entire family.

Unfazed
One week after surgery, Doug returned home. His strength and mobility were depleted. It took two people just to help him sit up. His vision was also severely affected. He said it seemed as if a plank covered parts of his eyes and he was unable to focus on objects.

Unfazed, Doug stood on the Word. He listened to healing scriptures 24/7. He fed on the DVDs from Winter Bible Seminar. And no matter what it looked like, he said over and over again, "God is healing me. I see everything."

Slowly but surely, Doug began to regain his stamina and strength. At the end of April, he preached in his church for the first time since the surgery. His message was short, but he did it! Doug also saw a 33-percent gain in his vision over four months. And it's still improving today!

"I came out of Rhema," Doug pointed out. "I have that spirit of 'I cannot be defeated, and I will not quit.' I was determined to come back better than ever."

"God is so faithful," he continued. "This was a fiery dart that came to take me out—to steal my effectiveness. But thank God for the shield of faith that extinguishes those darts! Thank God for the spirit of faith we received at Rhema that says you can rise above circumstances. I'm a walking miracle!"

Doug continues to enjoy pastoring Westchester Family Church. He and Christine have been there for 12 years now. The church continues to thrive. This year they are striving to reach more in their community with the Gospel and love of Jesus Christ.