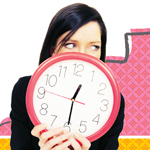 A good lesson I learned when my husband and I first started working at Kenneth Hagin Ministries was how to wait on God. It was a hard lesson, and at first it gave me a lot of grey hair.

You see, I'm a "happener"! If something needs to be done, I will make it happen. It was my responsibility to carry out the decisions of my father-in-law, the late Kenneth E. Hagin. But before I could do anything, I had to wait until he decided what to do. And he was never in a hurry when it came to making decisions.

As you're trusting God, don't get in a hurry. STAND STILL and WAIT until He speaks to you.

Through the years, I've learned it's better to wait on the Lord until He shows me what to do. Many times we rush the decision-making process and make wrong choices. Some of our decisions can affect us for the rest of our lives.

It's so important that we are prayerful about the decisions we make. They need to be God decisions, not our decisions. Our plans and desires have to be taken out of the equation.

Before I understood the importance of waiting on the Lord, I tried to help God out! For example, when I was a teenager, I knew I was going to marry a minister. And being the planner that I am, I started planning for that early. At that time, if you were going to be a minister's wife, you needed to know how to sing or play the piano. So I began taking piano lessons.

I always wanted God's plan five years ahead of time. Ten years would have been even better! But I found out that God gives us instructions for the first step. He doesn't give us the entire plan.

People have asked my husband and me about our five-year plan. The truth is, we often don't have a six-month plan. Those are man's methods, not God's. If you want to follow man's methods, that's all right. But I'm going to play by God's rules. He said, "Take no thought about tomorrow for tomorrow will take care of itself" (Matt. 6:34).

When we're faced with a decision, I'll pray, "God, show us what to do in this." When we do what He tells us, that opens the door to another step, and then another step. We keep taking those steps until the finality of what we've been praying about comes to pass.

As you're trusting God, don't get in a hurry. Stand still and wait until He speaks to you. I've watched Brother Hagin do this time and time again. And in the end everything has always come out right.

There were times when I thought God was taking too long. When we finally knew what the plan was, it looked like we wouldn't have enough time to get everything done. But when God says, "Now's the time," He puts all the pieces together.

You see, we don't know what's going on behind the scenes. While we're standing in faith, God is over here working on these people and then over there working on those people. He has to work out both of those situations before His plan can come together. We just have to rest in peace and confidence, and in communing with Him.

One time the Lord said to me, "Faith people have gotten hold of confessing the Word, claiming the Word, and knowing their rights and authority in Christ. But they're way behind in their communing with Me and letting Me guide every step of their lives. And that's why they're failing."

The only way we can STAY SENSITIVE to being led by our spirit is to commune with God's Spirit.

We need to confess the Word, but we also have to listen to our spirit. And the only way we can stay sensitive to being led by our spirit is to commune with God's Spirit.

I'm reminded of the time when God told Samuel to go to the household of Jesse and anoint a new king in Israel (see 1 Sam. 16:1–13). Seven of Jesse's sons passed before Samuel, and each time the Lord said, "No, he's not the one." Samuel didn't know beforehand who the next king would be. It was through a process of elimination that he found out David was the next king. If Samuel hadn't had a listening ear, he wouldn't have known which of Jesse's sons to anoint.

In our own lives, to follow the Lord each step of the way, we, like Samuel, must have a sensitive ear. The only way we can have that is to stay in constant communication with our Heavenly Father. We can't wait until a crisis comes and we need an answer to learn how to hear from Him.

As we rest in the Lord and stay sensitive to His voice, He will open the next door and show us the next step we are to take. And as we learn to follow God in each step, we will make the right decisions and be where He wants us to be and do what He wants us to do.

As you follow after God, here are some tips to help
you stay on course.

Learn More
To learn more about being led by the Holy Spirit, go to khm.com/p3st and watch Kirk DuBois' message from Winter Bible Seminar 2013.