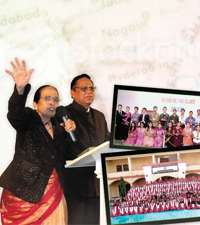 At Campmeeting 1989 Kenneth E. Hagin was ministering when he saw in the spiritual realm a brown-skinned man wearing a white turban appear in front of the pulpit. The man in the vision told Brother Hagin that he was from Northern India and said the enemy was trying to hinder a move of God in his area. He was asking for help.

Narhari and Lata Thorat, both 1991 graduates of Rhema  Bible Training Center USA, believe they are part of God’s answer to that request even though they almost didn’t attend Rhema.

Narhari was actively involved with a denominational Christian organization in India and was contemplating working with them for 10 more years until his retirement. The director of the  organization told him Kenneth Hagin Ministries was a cult. But the couple’s son, Vinny, was a student at Rhema Bible Training Center at the time and was praying for his parents to attend Rhema.

Narhari said he would pray about it as well. One month later he made the decision to attend Rhema.

Both Narhari and Lata loved attending Rhema Bible Training Center. “We have been very blessed through Rhema and we cannot express what Rhema has done for us,” Narhari said. “We thank God that in His providence He gave us this opportunity. We would be locked up in one place instead of doing what God would have us do.”

Narhari and Lata graduated on May 17, 1991. Two weeks later the Thorats were leaving Tulsa for India with a layover in Washington, D.C. Vinny, who had been complaining of headaches, helped them pack and told them goodbye at the airport. When the Thorats arrived in Washington, they were met by a Rhema graduate who lived in the area. He told them their son was very sick and helped them book a return flight to Tulsa.

When they arrived, they were told the reason behind Vinny’s headaches. There was a tumor on his brain stem. Because Vinny was in severe pain, doctors attempted to operate on him. But when they did, the tumor burst and he died instantly.

After dealing with the tragedy of losing and burying a son, the Thorats didn’t sulk or blame God. They did exactly what they believed God was calling them to do: start a Bible school in India.

“God brought us here to this region to fulfill this plan,” Lata said. “This is not Vinny’s vision. This is not the Thorats’ vision. It is God’s vision. Since 1991 when we started until now, we have seen God’s hand in all the work we have done.”

“We started with 40 graduates in our charter class,” Narhari said. “That was in 1992. From 1992 until 2011, the total comes to 2,598 graduates. We have graduates placed in all 28 states in India. This message of faith is reaching all over India. We also have graduates in four other countries: Nepal, Bhutan, Burma, and Nigeria.”

And those graduates are making a difference. Not only are they getting people saved, delivered, and filled with the Holy Spirit, they are seeing miracles in abundance. Graduates have reported people being healed of cancer and heart conditions, and even being raised from the dead. In their church alone, the Thorats have seen nearly 600 healings and other miracles in the last two years.

Looks as if their prayers are being answered.

‘I am totally changed’

“I was 56 years old when I came to Rhema Nagpur, India. Before I became a student, I was not bold enough to pray and I did not know how to preach. At Rhema, the instructors taught me the things that I was lacking in my life. I received new revelation of the Word of God, and I am very much blessed with all the teachings from all the instructors. I came to Rhema as nothing, and one day was meditating on John 2:7 where Jesus told the servants to fill the empty jars with water. The teachers at Rhema are the servants of God and they are filling up empty jars (students) with water (the Word of God and the Holy Spirit). I now can boldly say that I am totally changed because of the teaching I received at Rhema. Glory to God!” // Paul C. Prabhakar // Rhema Nagpur, India Graduate

Narhari and Lata Thorat experienced a terrible loss when their son, Vinny, went home to be with the Lord as a young man. But they didn’t harbor resentment toward God. Although they were saddened and grieved over Vinny’s death, they didn’t turn their backs on God and walk away.

Have you experienced a tragedy that you’re blaming on God? You need to understand that God didn’t cause it. Jesus said in John 10:10 (NKJV), “The thief does not come except to steal, and to kill, and to destroy. I have come that they may have life, and that they may have it more abundantly.”

Are you angry at God? Have you turned your back on Him and walked away? Well, it’s time to come back. He is waiting on you with open arms.

God,
Please forgive me for blaming You for something that wasn’t Your fault. Please also forgive me for everything else I’ve done wrong. Thank You for sending Your Son, Jesus, to die on the cross for my sins. I accept Him now as my Lord and Savior.
In Jesus’ Name,
Amen.

If you prayed this prayer, welcome to God’s family! We would like to send you some free materials to help you in your new life with God. Email us at PartnerService@rhema.org or call us at 1-800-54-FAITH (543-2484).